Howard495 is pleased to present a group exhibition featuring works by Tracey Emin,Lisa Yuskavage, Chloe Wise, Sarah Anne Johnson, Richard Prince, Alex Prager, and Jon Rafman. Each of these artists employ a broad spectrum of approaches in order to examine their inner narratives, digging into life’s surfaces and suggesting new possibilities for understanding their internal and external worlds.

Marked by a collective outcry, manifested in part by the #metoo movement, women artists are once again a hot talking point. There is no question that there remains an archaic, gender imparity in the art world, led by the privilege and patriarchy of male “culture-makers”. Having hard conversations about the structures that underpin this imparity, plays an integral role in correcting the systems themselves. Though many people will, as others currently do, feel very uncomfortable with these discussions, they aid in laying the foundations on which to rewrite the history from a point of view outside of a gender paradigm.

A recent survey of the permanent collections of 18 prominent art museums in the US revealed that 87% are male, 13% female and further investigations into exhibition history over the past decade found 14% of the exhibitions held were of work by women artists, with 22% having solo shows. This exhibition flips history on its head, switching this ratio, elevating women artists in order to inspire conversations about these systems and structures of power and imparity. The show is a framework to not only support the notion that gender is irrelevant to the quality, integrity and value of the work, but also to encourage a new system. A system where assigning agency to diverse voices who are bound to the beauty and necessity of artistic expression is the norm rather than the exception. 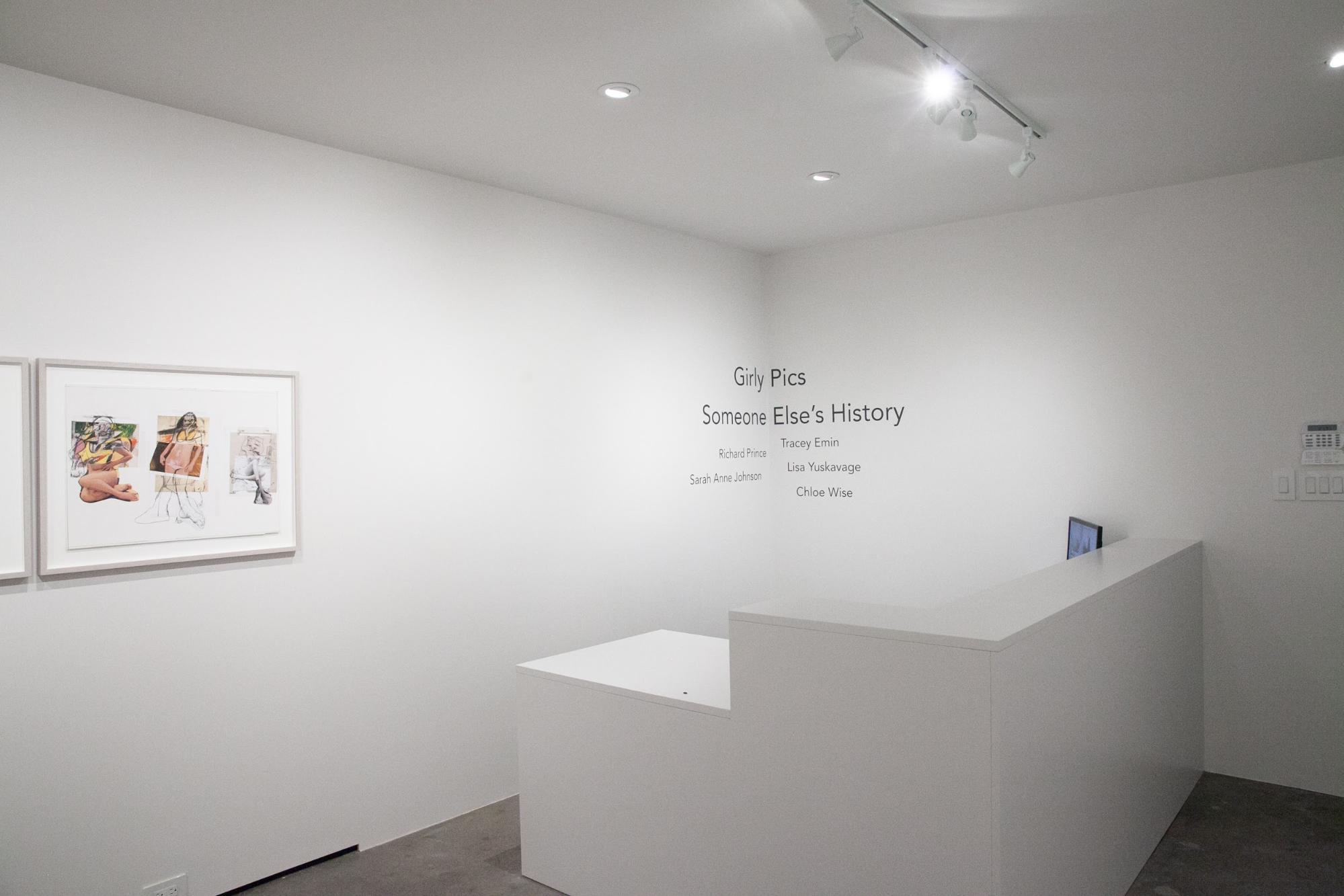 Mining images from mass media, advertising and entertainment since the late 1970s, Richard Prince has redefined the concepts of authorship, ownership, and aura. Applying his understanding of the complex transactions of representation to the making of art, he evolved a unique signature filled with echoes of other signatures yet that is unquestionably his own. An avid collector and perceptive chronicler of American subcultures and vernaculars and their role in the construction of American identity, he has probed the depths of racism, sexism, and psychosis in mainstream humor; the mythical status of cowboys, bikers, customized cars, and celebrities; and most recently, the push–pull allure of pulp fiction and soft porn, producing such unlikely icons as the highly coveted Nurse paintings. 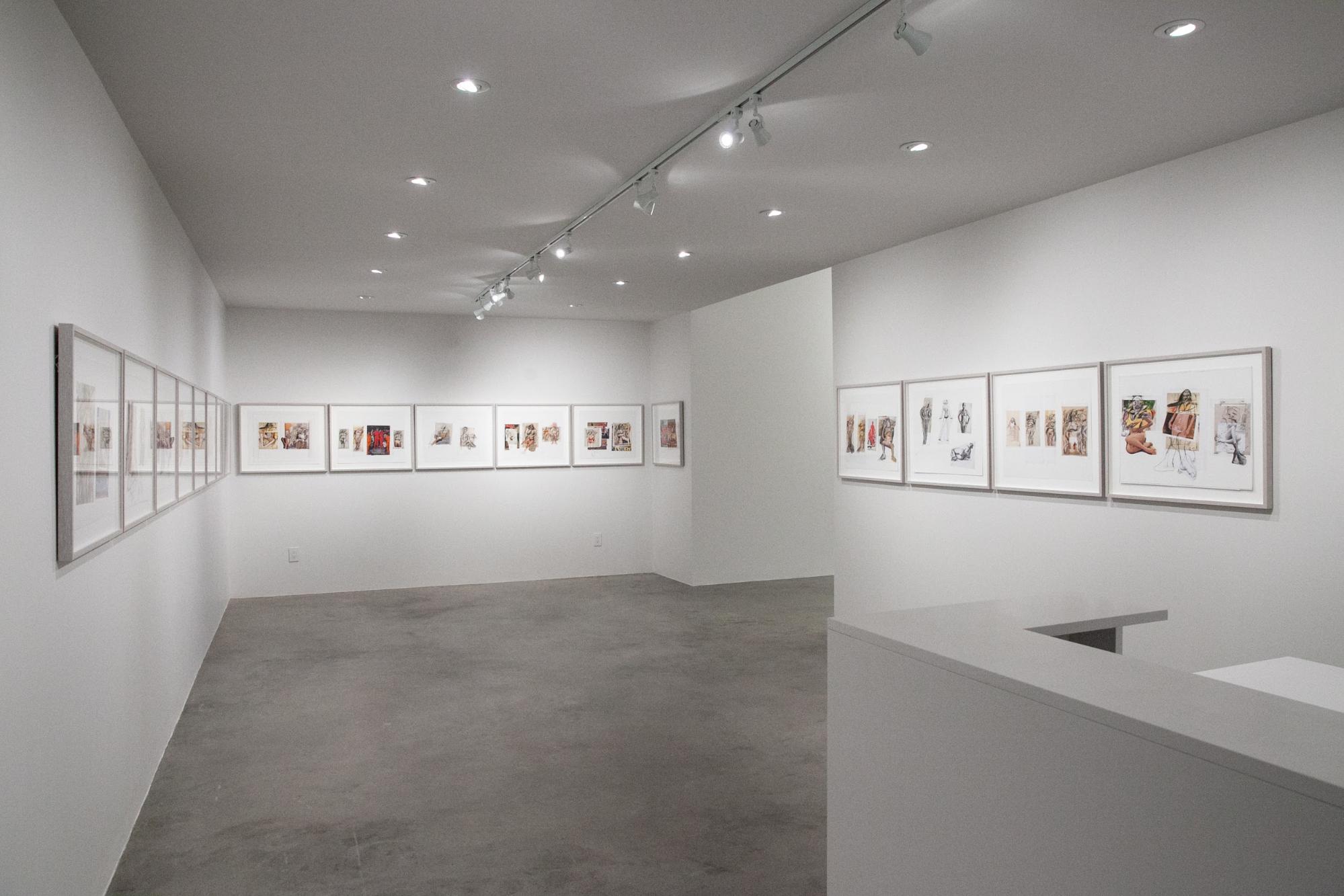 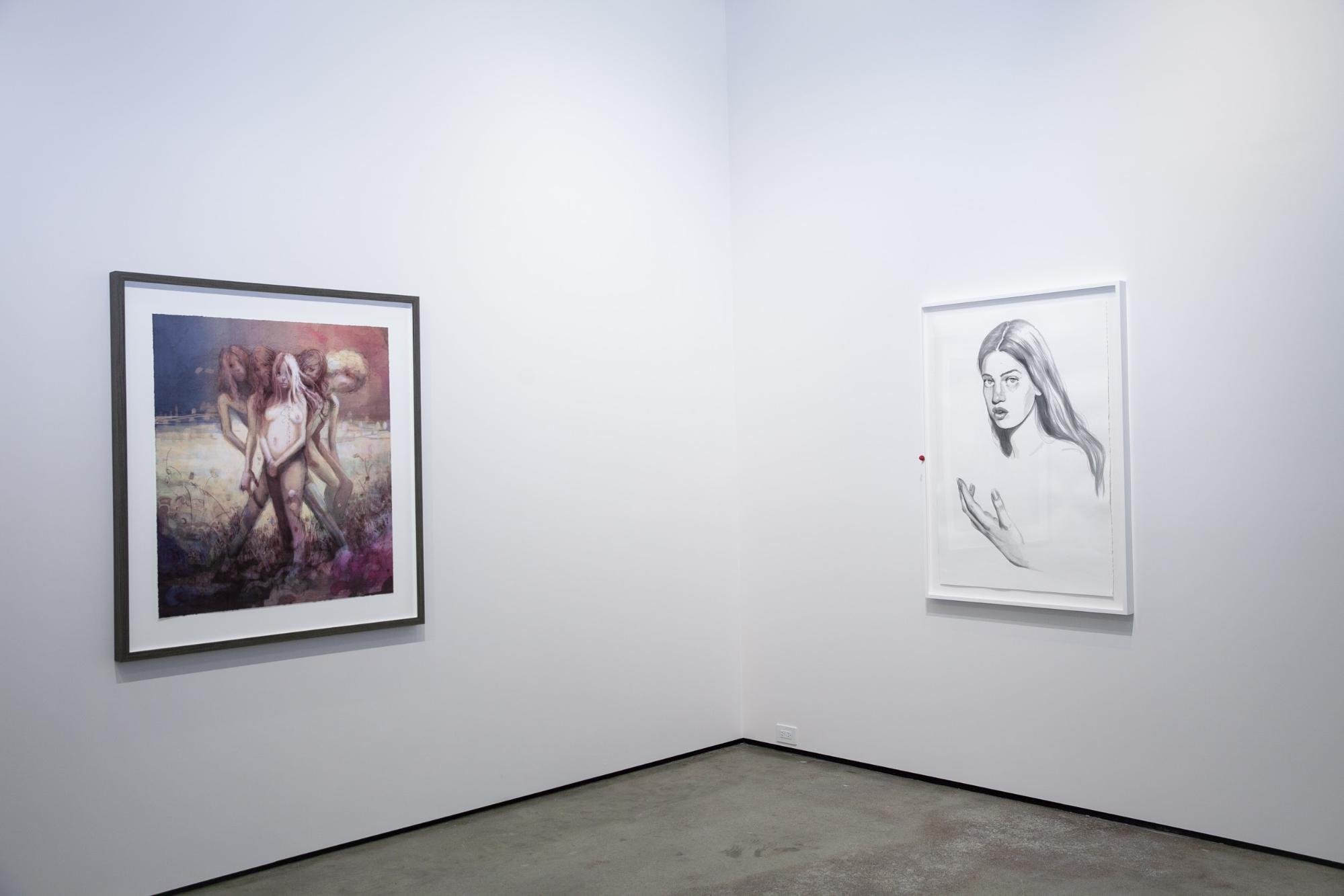 Chloe Wise’s practice spans diverse media, including painting, sculpture, video and installation. Foregrounding an interest in the history of portraiture, Wise examines the multiple channels that lead to the construction of a Self, paying particular attention to the interweaving of consumption and image making. With a wry sense of humour, she nods to canonical tableaux, like Manet’s Déjeuner Sur L’Herbe, exploring the shared projected desires built around food and the female body. Meticulously hand painted casts of food serve as the base for the artist’s sculptural practice where strange assemblies, now frozen in sculpted plastic, toy with the presence and absence of unchangeability and perishability, fiction and reality. Advertising, fashion, taboo, multi-national brands—Wise looks to the consumptive habits built around these structures with parody and derision, underlying how the body is framed and becomes excessive in its manipulation of these sites.

For more than thirty years, Lisa Yuskavage’s highly original approach to figurative painting has challenged conventional understandings of the genre and influenced subsequent generations of artists. Her simultaneously bold, eccentric, exhibitionist, and introspective characters assume dual roles of subject and object, complicating the position of viewership. At times playful and harmonious, and at other times reful and conflicted, these characters are cast within fantastical compositions in which realistic and abstract elements coexist and color determines meaning. While the artist’s painterly techniques evoke art historical precedents, her motifs are often inspired by popular culture, creating an underlying dichotomy between high and low and, by implication, sacred and profane, harmony and dissonance. Yet her oeuvre compellingly resists categorization, insisting instead on its own kind of emotional formalism in which characters and pictorial inventions assume equal importance.

Sarah Anne Johnson uses photography as a base for manipulation to fabricate an image that expresses not just a moment in time, but the feelings she has towards the subject. Adding materials such as paints, retouching inks, glitter, as well as incorporating burning, scratching, and gouging, each photograph is a unique attempt to make visual what is felt by the artist about each work.

She studied Fine Arts at the University of Manitoba and completed her Graduate studies at the Yale School of Art in 2004. She is a photo-based artist who uses a variety of media in realizing her work. Her graduating exhibition, “Tree Planting” consisting of 64 colour photographs of various sizes depicting her experiences tree planting in Northern Manitoba, was purchased by The Solomon R Guggenheim Museum for their permanent collection. Upon graduating from her Master’s program, she was awarded the Schickle-Collingwood Prize from the Yale School of Art to fund the research for her next project, “the Galapagos Project”. In the 14 years which followed she created five more bodies of work and all of them have been exhibited broadly.

Alex Prager is a photographer and filmmaker who creates elaborately staged scenes that draw inspiration from a wide range of influences and references, including Hollywood cinema, experimental films, popular culture, and street photography. She deliberately casts and stages all of her works, merging past and contemporary sources to create a sense of ambiguity. Her familiar yet uncanny images depict worlds that synthesize fiction and reality and evoke a sense of nostalgia. Prager cultivates the surreal in her photographs and films, creating moments that feel like a fabricated memory or dream. Each photograph captures a moment frozen in time, inviting the viewer to “complete the story” and speculate about its narrative context. Prager’s work often makes the viewer aware of the voyeuristic nature of photography and film, establishing the uneasy feeling of intruding upon a potentially private moment. The highly choreographed nature of her photographs and films exposes the way images are constructed and consumed in our media-saturated society. 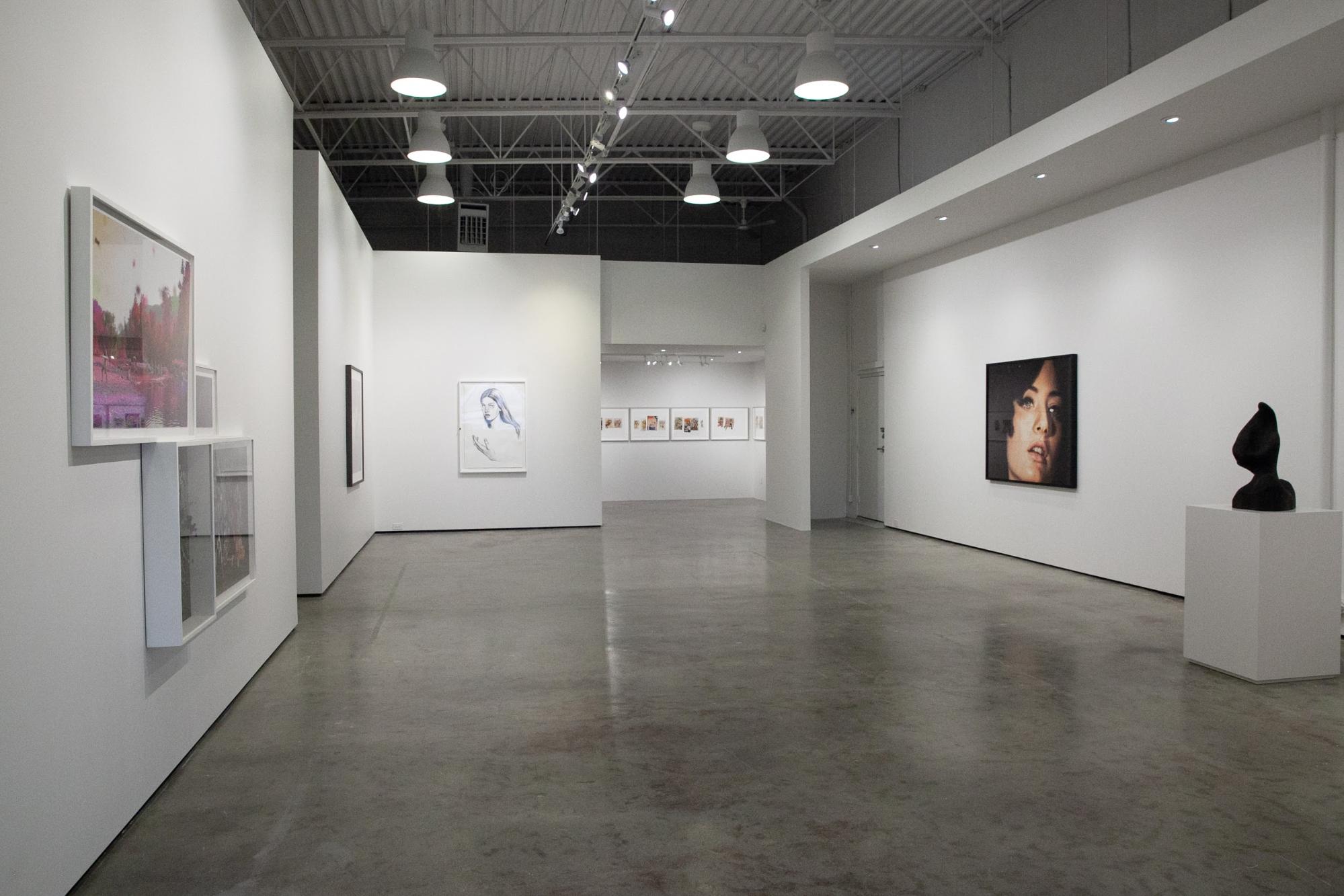 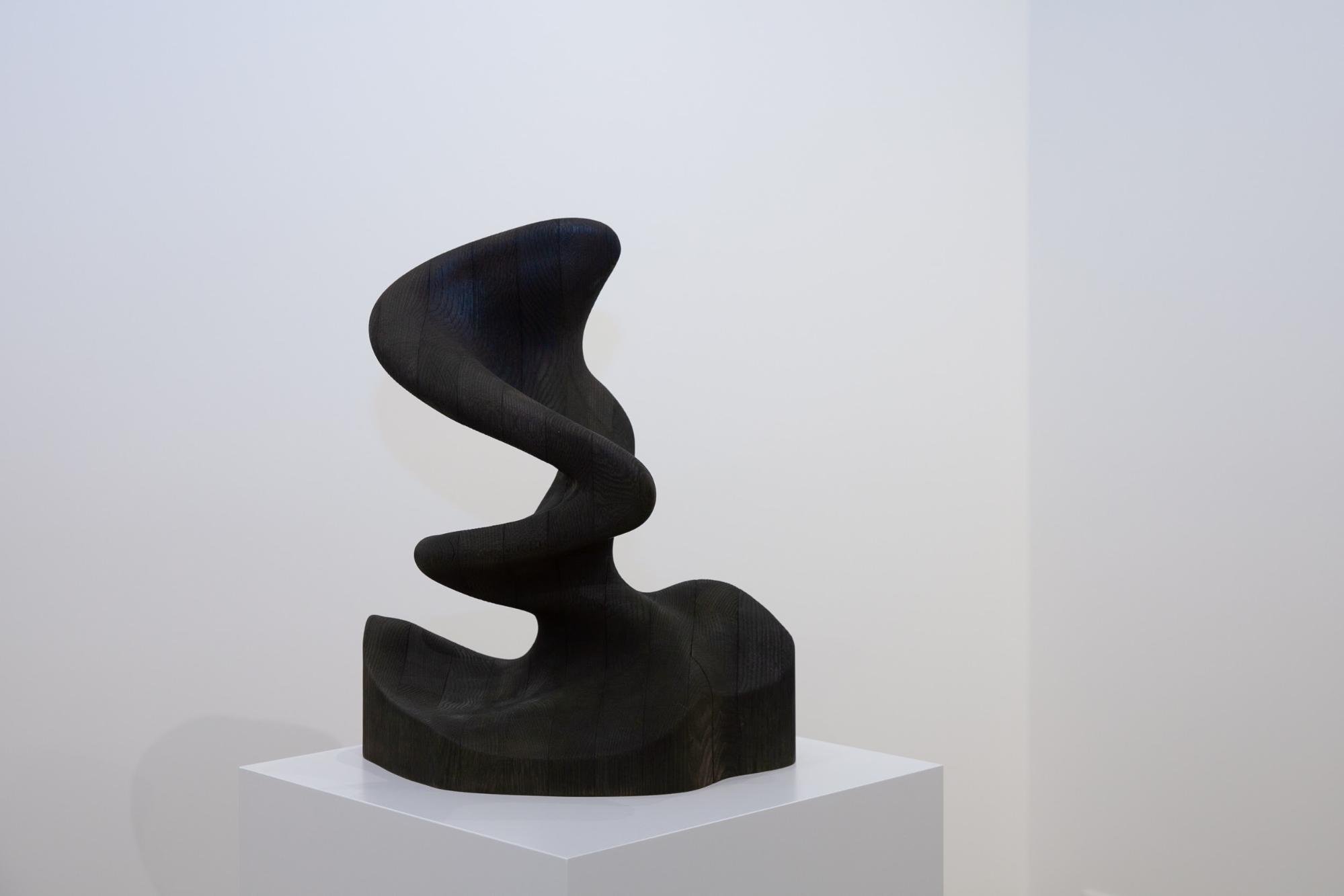 An explorer and archivist of internet culture, Jon Rafman investigates the changing nature of the self under contemporary conditions as he navigates the boundaries between the virtual and the real, the historical and the personal. His body of digital and physical works traverses the found and the made, the still and the moving, incorporating video, installation, sculpture, photography and painting. By going back and forth from material to virtual, Rafman brings attention on how such a transformation has become intuitive for us, changing the different ways in which we know ourselves, and how we perceive and relate to the world around us. By exploring both the physical and the virtual, his works take up an unfamiliar and singular third space between the two realms.

Rafman makes environments, films, photographs and sculptures that examine the blurring of the real and virtual. Often constructing works which are composites of materials, including video footage, images, texts and quotes that he encounters in his extensive internet research, Rafman edits this material to create a poetic new narratives, while never concealing their source. Occasionally shocking and always engaging, his works force the viewer to enter into uncomfortable and unsettling psychological realms.

Tracey Emin’s art is one of disclosure, using her life events as inspiration for works ranging from painting, drawing, video and installation, to photography, needlework and sculpture. Emin reveals her hopes, humiliations, failures and successes in candid and, at times, excoriating work that is frequently both tragic and humorous.

Emin’s work has an immediacy and often sexually provocative attitude that firmly locates her oeuvre within the tradition of feminist discourse. By re-appropriating conventional handicraft techniques – or ‘women’s work’ – for radical intentions, Emin’s work resonates with the feminist tenets of the ‘personal as political’. In Everyone I’ve Ever Slept With, Emin used the process of appliqué to inscribe the names of lovers, friends and family within a small tent, into which the viewer had to crawl inside, becoming both voyeur and confidante. Her interest in the work of Edvard Munch and Egon Schiele particularly inform Emin’s paintings, monoprints and drawings, which explore complex personal states and ideas of self-representation through manifestly expressionist styles and themes. In 2011, Emin was appointed Professor of Drawing at the Royal Academy of Arts, London, and in 2012 was made Commander of the Most Excellent Order of the British Empire for her contributions to the visual arts.

Since the early ‘90s, Tracey Emin has produced a body of work that encompasses all forms of artistic expression, including painting, print-making, drawing, film, photography, installations, appliqué, sculpture and neon text. Although Emin first rose to prominence as part of the so-called generation of Young British Artists (YBA), the highly autobiographical nature of her work set it apart from the general artistic trends of the 1980s and 1990s. Emin is well known for her frank, confessional style and for transforming her inner emotional and psychological world – personal experiences, memories and feelings – into art that is both intimate yet profoundly universal. Her candid but unsentimental disclosure of personal trauma and crises, as well as aspects of her love life, have often led to controversy.