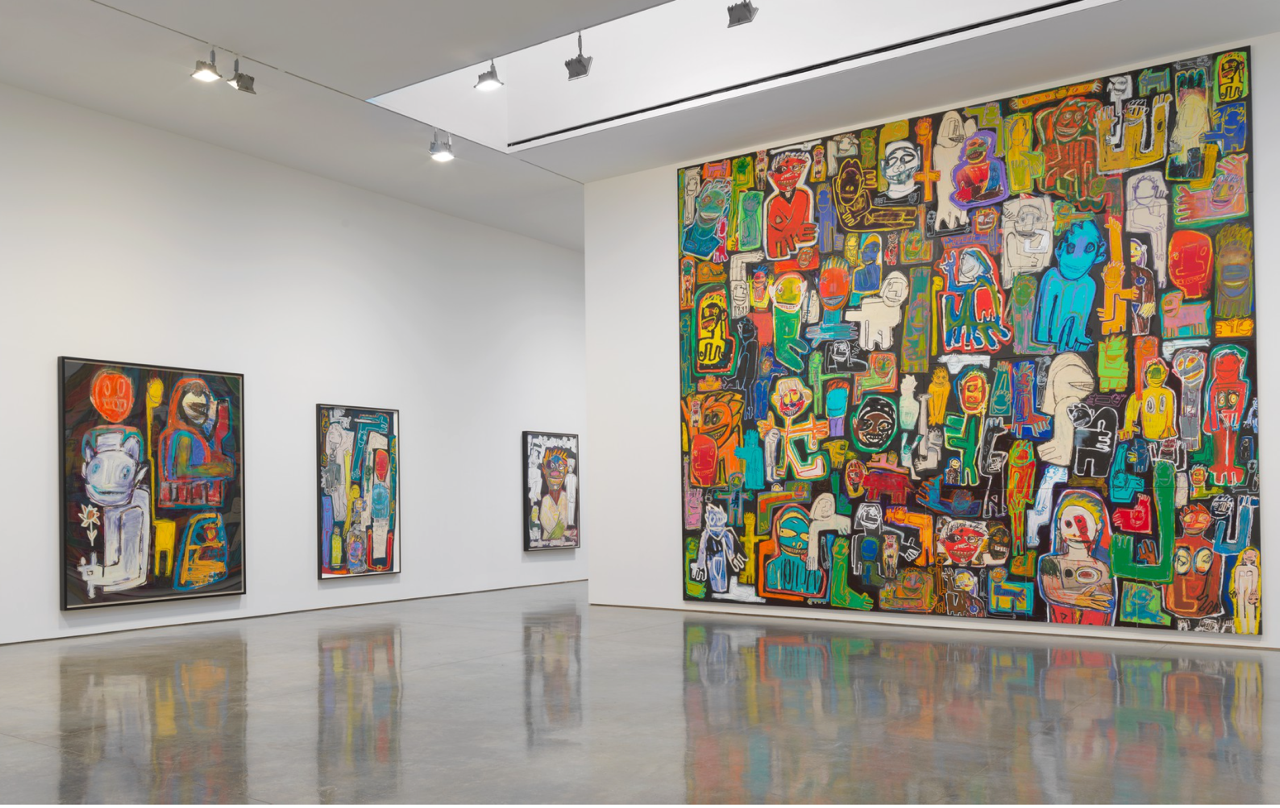 “High Times” at Gagosian in Chelsea, was not what I was expecting from a Richard Prince show…gone are the slick, impersonal, appropriated images that recall advertising and pop culture and in its place are monumental canvases collaged with inkjet reproductions of the “Hippie Drawings” he began quietly working on in the 1970’s. Inspired by the artwork of his children, Prince’s naive figures are deliberately arranged on the flat canvas with paint – dark, mostly black – used to delineate each of the images. Still, in the tradition of the Pictures Generation, Prince continues to appropriate images but, this time they are from his own hand. Canvas glued to canvas, paint, marker, pixels, photography an organized mash up. Expressionistic, bold, and fun to look at – drawing comparisons to Dubuffet and his Art Brut and the Neo -Expressionism of Basquiat.

—Joan Katz
Joan Katz is a writer and has known Richard Prince since 1990 when they were in a band together called Black Bra. She lives and works in Prague

He had started writing the names of bands directly onto the sleeves. Writing out the names of groups like Creamand Blind Faith, groups that he grew up with, reminded him of the term used to describe what these two groups were supposed to be:

SUPER GROUP.
This was better than Sleeve Paintings.
Super Group was lucky. Another lucky title. Another good title. Another nonfiction title. It fit with what he was making. The fit was perfect. “Perfect is true. Perfect is art.”
In the summer of 2016 Richard made a painting of four figures that he called his own Super Group. The painting was based on his early Hippie Drawings. The four figures were a made-up band, but “making up” was something Richard was still having trouble with. “Making up is always trouble.”
By the next summer he was still writing the names of bands on sleeves but he also started adding small hippie-like drawings to the sleeves. The combination of sleeves, names, and drawing made it to Berlin in September 2017, where he had a show called Super Group.
After returning from Berlin he stopped writing the names of bands on sleeves and then stopped using sleeves, but he kept on drawing and painting the hippie figures.
Back in 1998 you couldn’t own your own inkjet machine.
But this was 2017.
And every artist he knew had their own machine, and so did Richard.
The Jet Generation.
Richard started to make inkjet reproductions of his 1998–99 Hippie Drawings.
It’s got to start somewhere. And that’s where it started. He was appropriating himself. He didn’t put it that way. But that’s the way I can put it.
His old became new by using new technology.
You can inkjet on almost any surface . . . paper, canvas, linen, cloth. You can scale what you feed into the jet, big or small. It gives you a head start. The printed image can be redrawn, drawn over, added onto, or collaged with other drawings. A new painting can be rephotographed and that new painting can be fed back into the inkjet and you can print it out and start over. Change it. That’s what jetting is good for. Change. And you can do it quickly. The jet spits out the image on canvas in the morning and by the afternoon with nothing but an oil stick you can mark a new eye, nose, and mouth, and have a whole new painting.
High Times.
Calling these new paintings High Times made sense. It was an open title. “Open-ended.” The title was a lifetime of experiences. And besides, someone had already put that title on five of his Hippie Drawings. It wasn’t like Richard thought it up.
Fun.
“And it was fun.”
It was fun making these paintings. “Or at least I thought it was fun.”
That’s what Richard finally told me. And he told me wasn’t sure if he’d ever had fun making art.
He couldn’t recall if the emotion or the point of view of “having fun” had ever entered into his past experience of making art.
And if it wasn’t fun, so what?
It was true. And if it wasn’t true, the feelings were true.
Feels good. Something was good again.
“And I’m not sure I’m even pretending.”
And not pretending he was cool with.
“Yeah, I was cool with that. It was time. It was time to go back, remind . . . circle back to the ‘dead’ heads and do something that I was born to do.”
“Check it out.”
The High Times are him.

Howard495 is an Art Consultancy with a dynamic space specializing in secondary market work with a focus on the global market.  Krista Howard, H495’s art consultant and dealer, invites you to come explore the gallery at your leisure and immerse yourself in art work from local, national and international artists.